Collaboration is about doing better with less

Executives are sceptical of the value of social collaboration in the enterprise, and wait for it to go away. This is a mistake. They forget that many of the world’s biggest brands could not exist without the open source movement that created free software allowing Facebook to process one trillion page views every month. Amazon, Google, Twitter, YouTube, and just about every software startup in the world build their applications on top of open source software. Ask Microsoft, IBM or Oracle to quote for their equivalents of open source software and even if you get $20m of first-round funding for your new venture, you will not be able to afford the cost of their licences – ask the founder of WhatsApp which web software vendor he used to serve 900m active users in 2015, and he’ll tell you it was Linux, not Windows.

The open source community is working on over 100,000 software projects involving over 2m software developers. All the time. In contrast, Microsoft took seven years to release a new version of Windows to replace Windows XP, using a few hundred developers to bring it to market. And it failed (Windows Vista).

So what’s the difference? The first thing is that open source developers don’t use email to collaborate. It’s a bit last century. More importantly, the rules of open source models of collaboration are deliberately designed to create value by any means necessary that aren’t constrained by organisational relations and boundaries. At its core, is the idea that respect for hands-on knowledge wins over respect for abstract authority. Call it policy, call it culture, whatever you call it, it just works.

On-demand workforces like Odesk (now UpWork), Task Rabbit, Amazon’s Mechanical Turk and Gig Walk, are redefining how work gets done with platforms for managing large distributed workforces, connecting the right people with the right work, anytime, anywhere. What starts to happen to an organisation’s people costs when these platforms are plugged into their delivery processes?

Today, 1.1 billion Facebook users, 300m Twitter users, and millions of software developers use activity streams to process, filter, share and search ridiculously huge volumes of content. Whether executives like it or not, activity streams aren’t going away anytime soon; they simply work and have become the default means of consuming information around the web.

Social Leadership for the now

Forward-thinking leadership teams have realised that new ways of working with people at arm’s length have become the central managerial issue of all employing organisations, and not just of businesses. Many have realised disproportionate value from investing indistinctly ‘social’ collaboration platforms. Cemex, one of the world’s largest cement manufacturers deployed an internal social network to connect employees with common interests and crowdsource ideas for reducing its manufacturing costs and within three months, found an obscure factory in South America had already solved the problem, saving millions in consulting fees.

An insurance company in the United States used IBM’s social collaboration platform to coordinate and manage 600 brokers, and its own employees to re-engineer its sales processes. Celina insurance went from 245 employees generating $65 million in premiums before social business to 170 employees producing $110 million in premiums within two years of implementation. 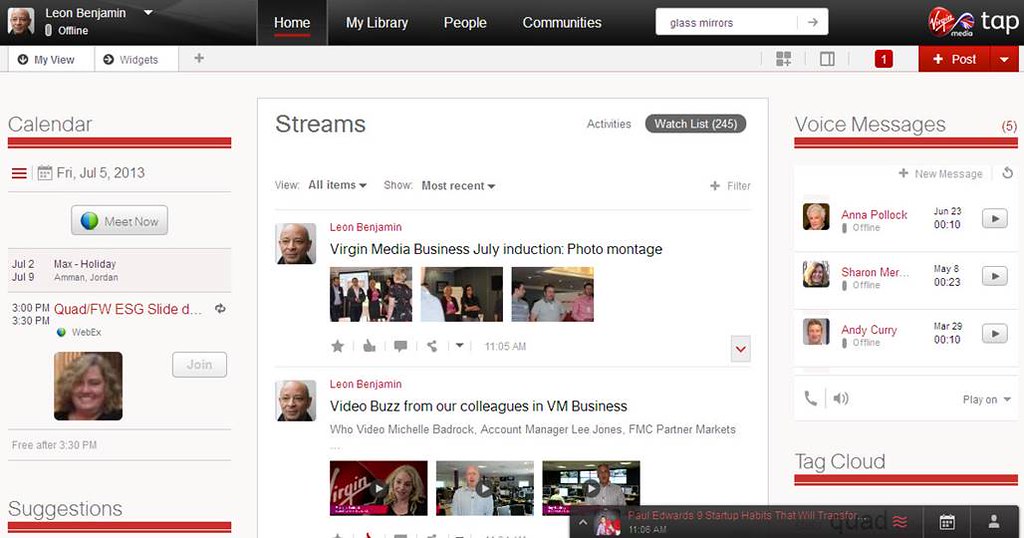 Virgin Media has reduced its annual travel expenses by 20% every year for the last three years following its investment in a broad range of web conferencing and social collaboration tools with its unique approach of integrating voice, video and activity streams accessible from a single platform to stimulate flexible working practices. In its first year of deployment, employee engagement scores jumped to the highest level ever recorded.

The ultimate prize of investments in collaboration technologies is developing the capability to create and manage network-centric, on-demand models of labour or rather doing better with less.

This is, after all, the essence of the open source movement; an efficiency in the allocation of labour most organisations only dream of.

← Prev: Voice is still a killer app Next: The value of unified communications →

Download our free pdf to score your digital workplace

You can unsubscribe at any time. Your details will not be shared with 3rd parties.

User adoption: why work with a service partner?

Are you launching a new digital workplace tool? Do you have a deadline for shutting down the old one? Are you worried about how you’ll get everyone to switch without disrupting the business? When launches like this go badly, people hate the new tools and cling to the old. When launches go well, we call it adoption. Find out what adoption is and why you need help from a partner.

From adoption toolkit to interactive “how-to” guides. Our content has just won the seal of approval.

Does Webex have a place in Education?

YES, is the answer I want to shout from the rooftops.       In a fantastic partnership with Cisco, we have developed and produced two eBooks all about how Webex can open a world of opportunities in preparing today’s students for tomorrow. Sounds...

Back to home page ^

Download our free pdf to score your digital workplace

You can unsubscribe at any time. Your details will not be shared with 3rd parties.